A DAY IN THE LIFE with TASHA EDWARDS 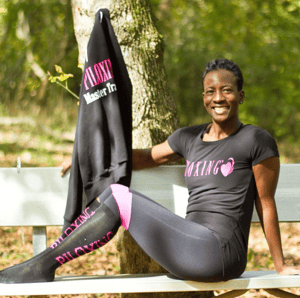 When you’ve been a part of the @Piloxing family for so long that you have pictures of yourself in “vintage gear.” 😂💕

Good morning and Happy Thursday from Alabama, USA!! I am Tasha (@hiphealthychick), the first Black Master Trainer for Piloxing. I was actually the first person certified for Piloxing in Alabama. Welcome to a day in my life.
⠀
I want you to know that I’m here not to just share my experiences of my coffee habit and what it’s like to work in an industry that can make you feel like you don’t belong BUT to share my love of @Piloxing (I’ve been at this a decade!) and my @Piloxing family. @Piloxing has ALWAYS been inclusive so they are not jumping on the bandwagon. This is who WE are.
⠀
Let’s do this!
SLEEK. SEXY. POWERFUL!!!!! 💪🏾💪🏾💪🏾 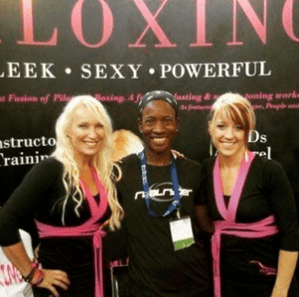 Atlanta @scwmania 2011.
I like to call this picture “the year between.” I had started teaching Piloxing the year before and became a Master Trainer a year later. @vivecajensen and @cortneypiloxing were people I knew. They were people who called me by name. They were women like me who were committed to making a change in this industry. I was a staff assistant for Mania that year. 2 years later, I’d be onstage behind Cortney, presenting for the conference.

Let me say that I often felt “weird” because, even at that size, I was always the “bigger girl” in the group. But, because I was given the opportunity, I KNEW I had to step up for all of the ones who looked like me...color, size and age (I didn’t start teaching Piloxing until I was 35 which can be considered ancient in the fitness world).

I’m glad I showed up and I will always be forever grateful to Viveca, Cortney and Natasha for the spaces the created for me. 💕💕 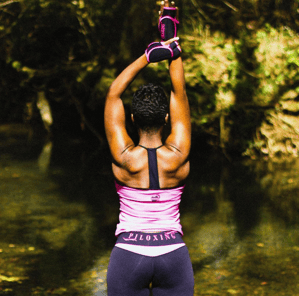 It exists. The racism. The exclusion. The isolation of being the “only one.” The shaming.
⠀
It’s something a lot of my fellow friends said they didn’t know existed. It’s because if you’ve never been directly affected then it’s not something you have to consider. No judgement. Just truth.
⠀
Here’s what it can do to you:
I have a Bachelor’s and Master’s degree. I am a @nutritionschool grad and finishing up my last wellness coaching certification as I type. I have a personal training and group fitness certification through @afaa_certified , a group fitness certification through @acefitness , several speciality certifications (like 20), a 250 hour yoga certification, a 500 hour comprehensive Pilates certification, three or four barre certification, was the first Black blog ambassador for @UnderArmourWomen, an the ambassador for several other companies, have 15 years of teaching and training experience....and I will still be told I am unqualified or only deserve to get paid base pay or (when they are really honest), I don’t have the “look.” I’m 45, coming to the end of the five hardest years of my life and going into menopause and I am STILL GOING. So now my goal is to open AS MANY doors as I can to those who have disregarded because of race, sex, age, body type, sexuality, gender or religious preferences.
⠀
On the day of my certification, I was in the bathroom and really wanted to try on some @Piloxing gear. I said, “My butt is too big and won’t fit in these.” @VivecaJensen, instead of shaming me, said, “Girl, I have a butt too.”
⠀
She then became my secret BFF and I bought the pants. 💕💕
⠀
You, just as you are, are MORE than enough. Don’t quit because of what “they” said. Fight harder because of it!!!! 💪🏾 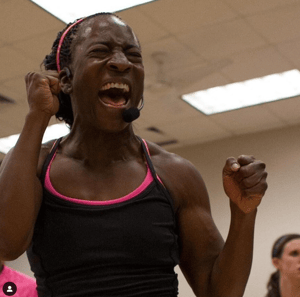 If I had one message to leave you with, it would be:

BELIEVE IN YOUR OWN POWER.
I am a girl from the South Side of Chicago, raised in a housing project whose parents couldn’t afford dance lessons. I was constantly belittled for being what people considered “underprivileged.” I learned VERY EARLY that I would spend my life either breaking barriers or getting crushed by them.

I am in the process of having to rebuild my life. My body is changing. My focus is shifting. I am recovering from five years of battling PTSD, depression and anxiety. I know what it’s like to be down, discouraged, frustrated, angry and afraid. However, I know the world still needs what I have to offer and so I show up.

SHOW UP for yourselves and others. Silence the fear that keeps you from speaking out against injustices. Challenge your own prejudices. Step into your greatness. Step up for our world. Be inclusive with your classes. Make it where everyone belongs.

Yes, you ARE that powerful. 💪🏾
I’ll be in IG stories for a little while more but wanted to thank you for reading what I had to share today. Blessing to you all!!! 💕💕🙏🏿

PILOXING Pride Sarah BurneyJune 08 🏳️‍🌈🏳️‍🌈🏳️‍🌈 Pride is something that I have been celebrating for years, even before I was able to stand in my own truth. As a young dancer, I ...
A DAY IN THE LIFE with AMEENAH ASANTE Ameenah AsanteSeptember 01 𝘏𝘪 𝘌𝘷𝘦𝘳𝘺𝘰𝘯𝘦, 𝘐'𝘮 𝘈𝘮𝘦𝘦𝘯𝘢𝘩 𝘈𝘴𝘢𝘯𝘵𝘦, 𝘢𝘯 𝘈𝘮𝘦𝘳𝘪𝘤𝘢𝘯 𝘗𝘪𝘭𝘰𝘹𝘪𝘯𝘨 𝘔𝘢𝘴𝘵𝘦𝘳 𝘛𝘳𝘢𝘪𝘯𝘦𝘳 𝘧𝘰𝘳 𝘚𝘚𝘗 𝘢𝘯𝘥 ...
A DAY IN THE LIFE with MARCELLE ZAGAMI Marcelle ZagamiAugust 01 I wanted to introduce myself with 15 facts about me in which anyone can relate that being told “no,”  is easy to accept, but challenging and ...

Heart-pumping, powerful, and fun! Experience the Workouts that everyone is talking about.

Join the movement that empowers bodies and minds. It’s time to make your workouts your mission.